No Deflation Here: LA vs. Boston Is The Super Bowl of CRE 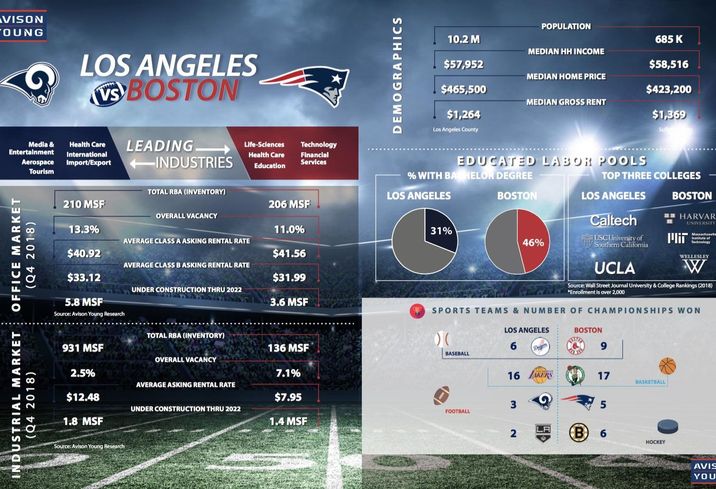 Boston and Los Angeles are facing off in their second major sports championship in four months, and, while it may be cold outside, the battle between these two cities’ athletic prowess and real estate markets is only just beginning to heat up.

The only thing more impressive than Tom Brady’s five Super Bowl rings may be Boston’s reputation as the leading life science cluster in the world. But if construction volume and pricing correlate to touchdowns, Rams fans will have a great game day. Researchers in both cities gave their real estate takeaways in Bisnow’s second Super Bowl of CRE.

“After taking a shellacking during the World Series against the Red Sox, we are hoping a Rams' Super Bowl victory will help heal that wound,” Los Angeles-based Avison Young Research Manager Artree Maharajh said. “What Los Angeles lacks in championship hardware against Boston it easily makes up for in its sheer juggernaut size and economic power.”

Los Angeles has an industrial inventory of nearly 1B SF with a mere 2.5% vacancy rate. Boston’s industrial portfolio totals 136M SF and has just over a 7% vacancy rate. While rents in the City of Angels average $12.48/SF, Beantown industrial product is going for less than $8/SF.

It is a closer game when it comes to the development pipeline, with 1.8M SF of industrial product under construction in Los Angeles compared to 1.4M SF in Boston.

“When it comes to the two CRE markets, the San Pedro Bay certainly puts LA ahead of Greater Boston when looking at industrial inventory and vacancy, but when it comes to Boston’s office and lab markets, it looks a little more like the Dodgers-Red Sox series this past October,” Avison Young Senior Research Analyst Tucker White said.

The Rams' home city may have an advantage in the industrial trenches, but California-based Kidder Matthews Director of Research Jerry Holdner added Boston has more of an even playing field when it comes to the office market.

Office vacancy rates in Boston’s urban core have dipped below 10% and under 2% across the Charles River in Cambridge's Kendall Square, where tech and biotech companies have pushed rents to over $80/SF, according to Perry Director of Intelligence Brendan Carroll.

Those in La-La Land CRE aren’t shaking in their cleats over the rivaling office market statistics.

Google, City National Bank and ACCO Engineered Systems leased a combined 640K SF of office by the end of 2018 in Los Angeles, and net absorption was positive for the sixth consecutive quarter, according to Holdner.

Many office tenants have been following a right-sizing trend, but LA’s mix of technology, media and coworking companies have been on an expansion trend. It doesn’t hurt that $4.5B of venture capital money poured into the three sectors over the first nine months of 2018, he added.

There is also 6.5M SF of office under construction in Los Angeles compared to nearly 5M SF in Boston. Los Angeles’ office tenant mix includes expanding companies like Netflix, Google and Amazon Studios compared to Boston’s biotech and financial base like State Street and Sanofi, both of which recently inked high-profile office leases.

“You could say this Super Bowl will be the battle between the cool kids and bookworms,” Maharajh said with a laugh.