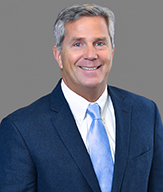 Greg Morrison, CCIM, SIOR, is widely recognized as one of Central Florida's leading commercial real estate professionals. Morrison, who has more than 30 years of experience in the Orlando commercial real estate market, specializes in the marketing of office properties for lease and sale, as well as the representation of tenants and buyers in search of space or land for development. He has consistently impressed clients with his superior market knowledge, attention to detail, work ethic, and strong negotiation skills securing optimal deal terms for his clients in every situation.

Prior to joining Avison Young, Morrison was the principal and founder of Morrison Commercial Real Estate, a full-service brokerage firm that represented over 3.5 million square feet of office and industrial space in Orlando. In this capacity, Morrison played a critical role in facilitating countless transactions from inception to closing in all sectors, including office, industrial and land. This position also gave Morrison exceptional  skills in managing a complex operation and business development. Before starting his own firm he held brokerage positions at Advantis, NAI Welsh, Pizzuti Companies, and one of Orlando's longest-standing local commercial real estate firms, The Bywater Company.

Morrison's career has resulted in the successful completion of more than $800 million in lease and sale transactions.